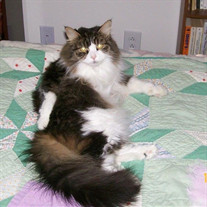 Angel March 31, 1999 – October 3, 2019 One day in May 1999, I was volunteering at a pet shelter at the time (long since closed), and had been at PetSmart all day with kittens trying to adopt them out. Angel was an eight week old little fur ball in the corner of the cage and I thought she had been shivering so I was afraid she was sick. I didn’t want to take her back to the shelter, so she came home with me and never left. I realized she was not shivering, but she was purring and her purr was bigger than her because it made her shake. I wasn’t sure if she was a boy or girl, and at the time I watched a TV show called Buffy the Vampire Slayer which had a character named Angel who was a man. So, I chose Angel which I figured fit either way. She sure did fit that name perfectly as she was an angel in my life for over 20 years! Angel loved to be pet and brushed. She purred all the time when I pet her or talked to her. She loved curling up in her heated bed. She hated to have her claws clipped. One would think with me clipping them once a month for 20 years she would’ve gotten used to it, but no. She screamed bloody murder as if I were killing her almost every time! She had these little horns that grew out of the pads on her paw so I had to be careful not to let her claws get too long or they ran the risk of growing into the horns. In the last few years, Angel lived in her own bedroom with a special door so she could still see out and the other kitties could see her. But she lived in the lap of luxury. She had her own space and her own food. I would spend time with her every evening. Since she passed it has been hard on me when it gets to be later in the night as I would always go sit with her and wind down for the night by petting her and attempting to trim her clumps or brush her. She had stopped grooming herself as she got older, but she was very patient to let me trim her fur. It was as if she knew I was trying to help her. Once she’d had enough, though, she let me know. Angel never caused me problems. She never picked on any other cat, she didn’t complain or fuss. She went to live in her own room because one of my other cats had been picking on her and at her age, I didn’t want her to be upset. I called Angel “Baby Fuzz” since she was a kitten. Also Fuzzers and, as she got older and somewhat crankier, Granny. She was deaf the last few years and had been on Prednisone, which I gave to her orally for the last few years of her life. She took it like a champ, even though it was cherry flavored (seriously??). Angel was the last of my crew from last century. She knew all my kitties who met her at the Rainbow Bridge: Indy, Autumn, Gypsy, Tigger, Binx and Beefy. She leaves to mourn her loss, me (her loving momma) and fursibs Lindy, Spackle, Snickers, Ellie, Henry and Georgie. Rest in Peace sweet Baby Fuzz. Thank you for being by my side for over 20 years.

Angel March 31, 1999 &#8211; October 3, 2019 One day in May 1999, I was volunteering at a pet shelter at the time (long since closed), and had been at PetSmart all day with kittens trying to adopt them out. Angel was an eight week old little... View Obituary & Service Information

The family of Angel Stoner created this Life Tributes page to make it easy to share your memories.