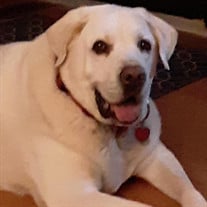 “In the whole history of the world there is but one thing that money cannot buy…to wit—the wag of a dog's tail.” - Walt Disney We’ve had many dogs over the years. Some were chosen pets; some were entrusted to us by Pilot Dogs to be raised and trained as guide dogs for the visually impaired. (www.pilotdogs.org) Dyson came to us as a “career change” dog from Pilot Dogs at age 2. He was trained to be a guide dog, but they thought he might have a hip problem. Turns out, he was just so darn big he would drag his back feet when he walked. It was our honor to have been his family. God created a Perfect Dog: our Dyson. Loving, happy, funny, protective, and tolerant of small children crawling and laying all over him. The grandkids would crawl into his kennel and smoosh him over. Even though this was HIS space, he would let them in and lick their giggling faces. Dyson’s favorite spot to lay was under my desk. In the summer, I would scrunch my toes in his ultra-soft fur; in winter, my socks would be covered in his fur after rubbing my socks over his back. Often, I had to make him move so I could get my slippers. I so miss having to do that. Our grandsons used to play with Matchbox and Hot Wheels (now it’s all electronic stuff). If cars were missing, someone would say “did anyone check Dyson?” Not 1, not 2, but usually 3 or 4 cars would be in his mouth. “Drop, Dyson.” And he’d slowly droop his head and allow the vehicles to slobber-drop to the floor as though it was perfectly natural for him to have several toy cars in his mouth. He loved to chase bubbles. Anyone blowing bubbles in the summer had to blow at him so he could chase them. You would think his breath would smell like soap after all the bubbles he caught; mmmm nah, not so much. Dyson loved visitors. When someone came in the house, he thought they were here to visit with HIM. He would pick up the first thing he could find (one of his toys, a Matchbox car, a shoe – whatever) and bring it to them as though offering a gift. When they would reach down to take it, he would slyly turn away j u s t before they could touch it. He loved this game, wagging his very large tail super-fast as he walked away as though to say “gotcha!” Dyson was not allowed in the kitchen when we were having a meal. Sometimes he would push the limit by laying in the doorway with just his head on the tile kitchen floor. He always had to be as close to us as he could get. Our adult daughters were Dyson’s people. If either of them was home, he was with them, following them around the house, poking them in the back of the leg as if to say “I’m glad you came to see me!” We miss our big, beautiful boy. We know he’s running in the clouds, chasing bubbles, and waiting on the angels to find the toys he is hiding in his mouth. Dyson crossed the Rainbow Bridge on Friday, February 19, just shy of his 13th birthday. We are completely devastated, but pet owners know on Day One when we bring a pet home that This Day will eventually arrive. He had severe spinal arthritis, pinched nerves in his spine, and could not stand up by himself anymore. His decline was swift; seemingly fine in January, and now he’s gone. If you made it this far, thanks for reading and enjoy your day. If you have a pet, let them lick your face. Just because they want to.

The family of Dyson Ansel created this Life Tributes page to make it easy to share your memories.

“In the whole history of the world there is but one thing that...