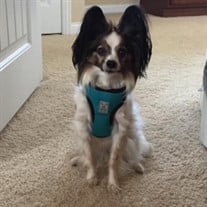 Elway "Barky" Hughes, 12 of Westerville, Ohio passed away suddenly and unexpectedly Wednesday, May 26, 2021 at 4:00pm. He is preceded in death by his parents Daisy and Stormy, sister Bella, and brother Magic. Born in a litter containing five puppies, Barky was the first pup to bark. He is survived by his adopted mom Andrea (Chris) Hughes, brother Leo Hughes, sister Maci, step sister Coco and countless extended family members. Never one to be ignored, Barky always came by his nickname honestly. Throughout his life he displayed an unwavering passion for car rides, chewing on a good tennis ball, chasing his feline sister through the house, begging for treats, and, most importantly, enjoying every waking moment with his family. Barky wasn't a tall man, nor was he big. He tipped the scales at a stout 8lbs but was not afraid to use every bit of what he had to get what he wanted. With his ears perked and a graceful, yet regal gait that screamed "royalty", he always radiated confidence. His dashing good looks gained him admirers wherever he went, often showering him in free treats at every drive thru. Despite lacking a formal education, Barky exuberated intelligence. His ability to read people and knowing, instinctually, what buttons to press to illicit the response he desired, was unparalleled. Wherever he went, he always left his mark, whether this was on the furniture, the rug, or in the hearts of everyone he encountered. The family is asking for privacy in this difficult time. In lieu of flowers and donations, the family is requesting that an extra treat be given to your pet today in Barky's honor. -Andrea

Elway "Barky" Hughes, 12 of Westerville, Ohio passed away suddenly and unexpectedly Wednesday, May 26, 2021 at 4:00pm. He is preceded in death by his parents Daisy and Stormy, sister Bella, and brother Magic. Born in a litter containing five... View Obituary & Service Information

The family of Elway "Barky" Hughes created this Life Tributes page to make it easy to share your memories.