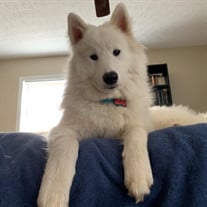 What Emmett Loved Car rides. On Emmett’s ride home from his first visit to the vet, his mama held him in her lap while he practically tried to climb out the window- he was so excited! His parents would eventually harness him into the backseat, roll all the windows down, and watch as he stuck his nose outside. Sometimes he would just sit back, eyes hooded, panting, smiling… His parents called it sit-running: the absolute best. Snow. Emmett was an arctic dog who was born in the wintertime, and it was a snowy one. When he was a puppy, he would dive face-first into snow piles in the yard and surface with little ice crystals clinging to strands of his fur. He and his little-big-beagle brother Racer would chase each other around the yard in the snow, and he loved catching snowballs in his mouth. When it was time to come inside, he also loved the pats and scratches that accompanied being toweled off. Squirrels. Emmett was blessed to live in a neighborhood full of squirrels. He was known to run back and forth under the powerline at the back of his yard as they chased each other across, as well as to try to climb the tree in his yard to join their party. When he would go for walks around his neighborhood and the squirrels would be running around and playing (he would always notice them before his mama did), he would try to run after them. His mama always knew, though, that this was a sign of love because he also ran after his cat brother and sister, but once they learned not to run, he would simply give them a thorough sniff-over and a lick on the head before going on his way. Once, one of his neighbors remarked at how his ears perked up and he stood alert at the notice of squirrels, and his mama said it was only because he wanted to make friends. The neighbor said, “Yes, he only wants to be friends. You can tell when a person is good.” People. If Emmett’s mama has any regret regarding her sweet baby boy, it’s that he didn’t get to meet more people; he definitely needed more people to love on him. Whenever Emmett would come home from daycare, he would be freshly brushed, and his parents were sure he had a human friend there that doted on him all day. Emmett and his brother got to run around the dog park sometimes, and Emmett would always approach the dog owners in the park to become better acquainted. One time, a girl of about five and her brother of about eight approached Emmett to pet him; the little girl actually threw her arms around Emmett’s waist and gave him a hug. Emmett had never met children, but he seemed to like them. After that, Emmett’s mama could imagine Emmett with a human brother and sister and how they would dress him up as a princess. “Best day since yesterday,” he would think, which he probably already did because he was such a happy boy who gave everyone the benefit of the doubt. His Family. Emmett’s family was his whole world. Of course, there is his little-big brother, Racer. When they first met, Emmett had hearts in his eyes for Racer, and he never stopped trying to mimic everything he did. Racer, being a beagle, inspired his floofy big-little brother to dig, sniff, bork, and mark… none of those behaviors came naturally to him, but if Racer did it, it was the thing to do. Whenever Emmett’s dad arrived home from work, he and his brother would first recognize the sound of his car, see him approaching the house through the window, and run outside to greet him. Emmett’s dad likes to work on cars, and when Dad was working, he would sometimes sit and watch (sometimes steal tools in his younger days), and sometimes go on his way for a while only to return to boop Dad from time to time to remind him to take a break to play, which Dad did. Emmett and his mama had a special bond: she always gave in to him, and he to her. When she would smile, he would smile; when she would dance and sing, he would dance and sing. He followed her everywhere, including to the bathroom (she didn’t mind- more opportunity to give him scrotches), and he would eagerly await her return at the back gate when she was away. He would hook his paw in the crook of her elbow to pull her hand from her phone for more scrotches and boop her in the hip when he needed to show her there was a cat in the neighbor’s yard. Sometimes they would touch forehead to forehead and read each other’s thoughts, always, “I love you.” -John Eisele & Jessica Hirashima

What Emmett Loved Car rides. On Emmett&#8217;s ride home from his first visit to the vet, his mama held him in her lap while he practically tried to climb out the window- he was so excited! His parents would eventually harness him into the backseat,... View Obituary & Service Information

The family of Emmett Eisele Hirashima created this Life Tributes page to make it easy to share your memories.

What Emmett Loved
Car rides. On Emmett’s ride home from his first...