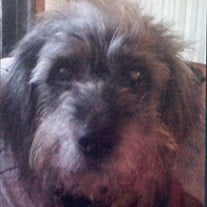 A few years ago I read a story about a girl named Lady Anne. She quoted part of a song "Close your eyes and rest your weary mind. I promise I will stay right here beside you. Today our lives were joined, became entwined;I wish that you could know how much I love you." January 27, 2018 My Iffy Boy crossed the Rainbow Bridge. Iffy and I found each other shortly after he was brought to the Licking County Dog Shelter in 2000. Iffy Boy loved going for car rides, walks, and racing his best neighbor friend up and down the fence. His most favoite thing he found later in life...RVing. He loved walking the beaches in Florida and meeting new people. In early 2011, Iffy was diagnosed with kidney failure. That night I told him if he wanted to fight, then fight is what we will do. Boy did he fight! A few years later he lost his eye sight and hearing, still he didn't slow down. January 2017 he was diagnosed with dementia. He became my little special needs boy. Iffy Boy got a stroller for his 17th birthday and we drove the wheels off of it. His favorite place to go was Lowes, so many different smells. Iffy was my baby, my boy! I never thought I could love a dog so much. He needed me and I needed him. We need to thank some extra speical people: Renee at Cozy Critters Grooming always made Iffy feel and look younger after his spa day, he was one of a kind with his fu manchu. The older he got they would wear him out,but boy did he love them and her. Corinna, she was lffys girlfriend/nurse. She could do anything she needed to him and he didn't care. Because of his kidney failure he recieved fluids weekly. Iffy Boy loved his Corinna so much and was always happy to smell her scent. Now we have Dr. Chad Herrick, Iffy was a handful when he first starting seeing Dr. Herrick. Not to say over the years he got much better. Iffy never missed a chance to try and bite him, but Dr. Herrick never gave up on my boy. All of these people helped me through the years with Iffy. I don't think we could've come so far without each of them. So from the bottom of our hearts we THANK YOU so very much. We also would like to thank Criss Wagner Hoskinson Funeral & Cremation for taking care of Iffy Boy. Iffy Boy leaves behind his mom, dad, brothers and sisters. Special little brother Tiler who always snuggled up to Iffy to keep him warm and to let him know he wasn't alone. Plus his extra special Aunt Pam. Iffy Boy joins brothers Rage, Eddy Scissor Fingers, niece Emma, cousins Bogie,Jake, Luke, Lynzie and best neighbor friend Conrad. Run my baby boy run. Listen to all the wonderful sounds. See all the beauitful sights and know your in Heaven. Until we meet again my baby. Mommy loves and misses you so much.

A few years ago I read a story about a girl named Lady Anne. She quoted part of a song "Close your eyes and rest your weary mind. I promise I will stay right here beside you. Today our lives were joined, became entwined;I wish that you could... View Obituary & Service Information

The family of Iffy Boy Sunkle created this Life Tributes page to make it easy to share your memories.

A few years ago I read a story about a girl named Lady Anne....