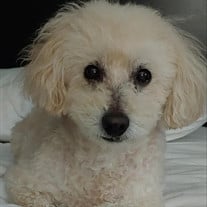 Mellow was born in Toledo, Ohio and made the unexpected trip to Columbus, Ohio when he was less than a year old in earthly (not doggy) years. I remember driving down the highway and he sat on my back seat whimpering all the way. I had never had a dog and he would be the first (which was only supposed to be a couple of weeks) while I kept him for my cousin Alyssa to move and get settled. As Mellow settled in Columbus, Ohio with myself and my daughter Delayna we grew to love this little dog. He would tear up everything, specifically shoes and he would only chew the toe off of one shoe of every pair he destroyed. Mellow knew when he had done something bad because he would run and hide in the back of his cage looking out at us. We chose not to cage him, and gave him free range of the house except for when we had to leave and go somewhere. Mellow became my security blanket and alarm when my daughter was away at College. Many nights I would call the police because he was barking towards the door late at night only to find nothing lol. Many nights he would wake me up to go outside at 4am in the morning and I just stood there looking at the stars and praying, while he sniffed the rocks and plants in the yard. Oh how I miss those nights now. The first haircut was a disaster I took him to a local pet shop to be groomed and they said he wouldn’t cooperate, (I really think it was them) when I arrived to pick him up his hair was all blown out around his face and legs and everything else was cut short. I was so mad. I took him to see a friend that was working at a local mall as I cried walking towards the entrance and everyone that walked pass me looked at Mellow like “what kind of dog is that” which didn’t help. I called the manager of the Pet Store and left a complaint message. He called me back the next day and asked that I bring Mellow back to the store for him to see him. When I arrived the manager came to the front of the store looked at Mellow and just told the cashier “give her the money back” looking back it was funny because that is how bad Mellow looked. Mellow would also comfort my mother after she had a stroke and came to live with us. He would jump up in her bed and lick on her and she would just laugh. Mellow was such an enjoyable dog. Prior to me getting married my friends asked my then fiance David how he was going to do with Mellow. He didn’t understand at first until after spending a few days with us, he quickly learned how important Mellow was too and in my life. Mellow would travel far and near with us just sitting in the back seat looking out the windows, sleeping and moving around. We always found Pet friendly hotels that allowed our Mellow to stay with us no matter where we traveled. Our last trip would be to Maryland with myself, David and Delayna. He did really well for such a long ride. I remember when he first began to get sick with the cough. We along with the Vet thought it was kennel cough and he was treated several times until it didn’t go away, then we took him to see specialist after specialist. Then the seizures started a year later and they progressed and got worse. We tried everything we were able to do and finally it became too much for Mellow to bear. It saddened me to see him up all night coughing and having seizure after seizure and then not being able to walk and stand up. It’s like his strength just began to leave little by little. As I lay across the bed looking to my husband for the “ok” to let Mellow go I just needed to know I was doing the right thing. Mellow came one day and looked at me in the eye as I was standing by the stove and his eyes told it all. It was if he was saying “mommy it’s too much, can I go now” that was my confirmation. No matter how hard it was I knew I had to relieve him of his pain. This little dog has brought me a life time of joy that no words will every do justice. Mommy and Daddy love and miss you sooooooooo much. Hope you are having fun with other little doggies over the Rainbow Bridge. Until we see each other again, Love you always Mellow aka melmel, melford, and Palle. -Danielle Lightner

Mellow was born in Toledo, Ohio and made the unexpected trip to Columbus, Ohio when he was less than a year old in earthly (not doggy) years. I remember driving down the highway and he sat on my back seat whimpering all the way. I had never... View Obituary & Service Information

The family of Mellow Lightner created this Life Tributes page to make it easy to share your memories.

Mellow was born in Toledo, Ohio and made the unexpected trip...