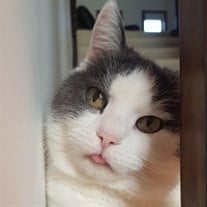 Mitzy was never a regular house cat. She found us in February 2004; she meowed at the door until we let her in. We heard her meows but were incredulous: it was almost 10PM, on a cold, snowy February night and our neighbors at Governor’s Square, where we were living at the time, didn’t own any cats. She barged in, a fluffy full-grown white and dark gray cat with huge green eyes and a hanging belly, and started sniffing; then she went right into our daughter’s bedroom. She looked shortly around then patted our daughter’s head with her left paw (she was a leftie), then went right out and meowed at the door to be let out. We complied. She did not come back that night but came again the following night. We started feeding her then she stayed longer and longer. Our daughter had been bugging us about getting a cat, as we were in the process of buying our first home; she was getting her wish. Two weeks after our first encounter, we moved out and took Mitzy with us (all our attempts to find her owners failed; we finally concluded they moved out and left her behind). She was very happy at the new house, as she had a large backyard to roam in and many cats to chase out. We installed a cat door in our door to the deck; she was in heaven. She brought us presents, alive or dead, which she presented to us on the living room carpet. We moved twice after that, she always got acquainted with the new place quickly and safely. She liked to take a few steps on the first day around the house, then more the next day and so on. She never got lost. We could never keep her for a whole day inside, she always wanted to go out. She never liked belly rubs or too many pets…you were in danger if you did not pay attention, as we or the vet could never clip her nails. She hated being in a car, in the carrier or at the vet’s office, where she felt she had no control. We never knew how old Mitzy was but you could not tell, aside of her size (she got to 16 lbs in the last three years) that she was old. Her face and her fur were as beautiful as they were when we met her. She was active although slightly slower and going up and down three flights of stairs several times each day. She was still brash and chatty, meowing our heads off every day. Unfortunately, she got sick around June 28, after we returned home following a three-week hospital stay. It was like she waited for us to tell us she was going to be ill-our neighbors who took care of her while we were gone said she was eating properly and being her normal self. Our daughter came back home from California to say good-bye and Mitzy seemed to be better for a bit. Then she left and Mitzy went back to not eating. Despite all the medical treatments, she never recovered. We scheduled euthanasia twice, we could not go through with it. She wasted away slowly but she still seemed to enjoy us taking her to the back yard where she could watch the birds. Mitzy passed away August 16. She left a huge hole in our hearts but also many happy memories. We will never forget her.

Mitzy was never a regular house cat. She found us in February 2004; she meowed at the door until we let her in. We heard her meows but were incredulous: it was almost 10PM, on a cold, snowy February night and our neighbors at Governor&#8217;s... View Obituary & Service Information

The family of Mitzy Golumbeanu created this Life Tributes page to make it easy to share your memories.

Mitzy was never a regular house cat. She found us in February...