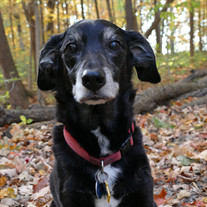 Mpho Tamarkin December 25, 2005 - January 20, 2020 In the South African town of Polokwane, Mpho (pronounced M’poh) entered Noah Tamarkin’s life at the age of 8 weeks in February 2006. He had been an unwanted puppy. His other accidental siblings were already adopted when he, as the last one of his litter, was handed to Noah. He licked Noah’s face and Noah became his. That day, this little but big black dog with a white chest patch became Mpho, which means gift in Sepedi and several other Southern African languages. Mpho’s first year on the red-earth terrain of Limpopo was filled with friendship from people, dogs, goats, and kittens. His favorite activities back then were chasing chickens, freely roaming, chewing everything available, and cuddling. When Mpho was 11 months old, he moved to the US with Noah, arriving at Boston’s Logan Airport on a chilly autumn evening. In Massachusetts, he discovered his love of snow, and he deeply bonded with Noah’s parents and siblings. Mpho then moved to California, where in September 2007 he met his other human packmate, Juno Parreñas. Since then, Mpho has lived in Oakland, California; Allston, Massachusetts; New Haven, Connecticut; Philadelphia, Pennsylvania; and finally Columbus, Ohio. In California, Mpho loved the Oakland Hills, the Berkeley Marina, Point Reyes, and the dog beach in Santa Cruz; he also secretly loved the redwoods surrounding the officially dog-free University of California Santa Cruz’s Colleges 9 and 10. In Massachusetts, he loved his friends at Ringer Park, his work life at Boston College and Brandeis University, his frequent visits to the Charles River and Harvard University, and his country get-aways to Andover and North Andover. For one year, Mpho split his time between Philadelphia, where he frequented Clark Park, and New Haven, where he had many adventures in East Rock. Mpho lived in Columbus, Ohio for the last six years of his life; it became his most consistent home. There, he was a regular on the Olentangy Trail, at Clinton Como Park, Park of Roses, Highbanks Metro Park, and Sharon Woods. In these beautiful parks, on his street, and in his own backyard, he had many multispecies encounters with deer, squirrels, opossums, raccoons, rabbits, cats, groundhogs, and a guinea pig. Mpho pursued many interests within his lifetime, such as sunbathing, squirrel studies, chipmunk studies, and rabbit studies, but cuddle studies remained his lifelong passion. He was an excellent traveler, having been trained by Noah early in his life to ride cramped public kombis in rural South Africa. Throughout his life and well into his senior years, he loved our travels to places like New York City, Seattle, and Southern California, and especially our hiking trips to New Mexico and Bavaria, Germany. Mpho’s decline was rapid over a period of two all too short months: he had been a very healthy geriatric dog until he one day exhibited discomfort. Finding nothing wrong in his bloodwork that day, his vet did an abdominal ultrasound and found a mass on his spleen. He had an emergency splenectomy the next day, during which the vet found lesions on his liver. The following week when the biopsy report came in, he was diagnosed with a rare and aggressive form of sarcoma. Chemotherapy a few weeks later did not work. Each blood test showed a steady decline in red blood cell count regeneration and he got progressively weaker. We are grateful for the excellent and compassionate care that Mpho received from the veterinarians and vet techs at Upper Arlington Animal Hospital, the Ohio State University Veterinary Medical Center, Walden Woods Veterinary Care Acupuncture and Chiropractic, Lap of Love Veterinary Hospice, and Schoedinger Pets Memorial and Cremation Services. We are also grateful for support and consultation from dear friend Dr. Illiana Quimbaya, and for the many people who have cared for him over the years. We are glad that Renee Needham took such fabulous portraits of Mpho before he became ill. Mpho’s death was as beautiful as he was in life. He left this world surrounded by our love. Mpho leaves a profound absence. He is survived by family and friends around the world. Noah’s parents will always miss their granddog. The now-grown people who played with him as a puppy in South Africa will always remember him as part of their childhoods. His many caregivers over the years, and the friends who were regulars in his life as well as those whose encounters with him were more fleeting, will remember his softness, his beauty, his appetite for treats, his sweetness, and his calming presence. As a much beloved emotional support animal, Mpho lent his loving snuggles to his pack in their greatest moments of need, including gender transition and affirmation, bereavement, academic job market angst, and writing anxieties. If you, too, miss Mpho, please consider a donation to Paw Fund http://pawfund.org/, and please advocate for emotional support animals and their people. We have grown into and around one another. Go well, Mpho, and please, also, stay forever.

The family of Mpho Tamarkin created this Life Tributes page to make it easy to share your memories.