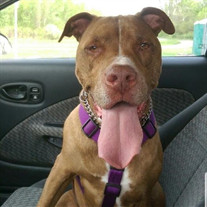 My Leia. She was brought to me as a puppy on October 21st,2006. She was a gift from my son Dustin and was born August 3, 2006 in Springfield..He bought Rossy his dog and my girl. She was the prettiest puppy I ever saw. Her color was brindle with a pink nose and markings I thought looked like a pink high heel on her nose. Their was white fur down her neck and chest and what looked like a white star in the middle of her chest. It was easy to see she was very special. Her ears were floppy and felt like velvet on the insides. She was a pit bull and was super smart, very fast and turned into quite the power house at about 66 pounds as an adult. The love and loyalty she showed our family made everyone fall in love with her. Highly protective of me around any strangers and even my son once when she thought he was getting a little rough with me, even though we were just playing. I took hundreds of pictures of Leia and she looked so regal and royal in many of them. Playing catch with the tennis ball was her favorite thing in our back yard. I went through dozens of Wilson & Penn cases over the years. She would pop them with her jaw power. We also ended up with a torn knee in 09 and a titanium plate from Med Vet that year. She was strong and healed well. We were regulars throughout the neighborhood for our walks and also all the parks around Groveport. Exploring was one of her favorite things. She also had a friend named Cheeky that lived with us for 10 years and they were like sisters..They did get old and fight towards the end of Cheeky's life. But we worked it out and kept them both until 2018 when she passed away. After that it was just Leia and us. She had another surgery in late 2019 to remove a mouth tumor. She once again at 13 years old recovered and went back to walks and cuddling. The last year was so hard watching her become weaker in her hind quarters but she still had a big heart full of love for all of the family. We all loved her so much she was rarely left alone and myself, my Mother and grown Sons all looked out for her. The last week was super hard. On her last day Chase and I took her to the park we used to walk at. She layed on her blanket along side us and soaked up the sunshine. This was always one of her favorite things to do when it wasn't too hot. Leia was known by many names, I called her Princess Leia Sofia, lady bug, boo boo. But we all called her Leia. The boys all had names for her too Lee Lee, Woo Woo..big head and many others. She was like the heart of our family and we all couldn't imagine life without her. In my heart I believe she was like my child not a dog and I will forever miss her. My best girl ever, my devoted and loyal girl till the end. Praying that we will be together again one day and she will be perfect just like I remembered her in the past.. always in my heart my Leia Sofia. From Mommy Terry

My Leia. She was brought to me as a puppy on October 21st,2006. She was a gift from my son Dustin and was born August 3, 2006 in Springfield..He bought Rossy his dog and my girl. She was the prettiest puppy I ever saw. Her color was brindle... View Obituary & Service Information

The family of Princess Leia Williams created this Life Tributes page to make it easy to share your memories.