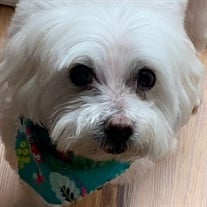 Rex Rousey April 2007-July 7 2021 Rex, a Maltese, was just 2 months old when we met. He was an adorable white, fluffy ball of energy, fun and mischief. His older brother Max, a Shih Tzu, was less than thrilled with the puppy. However, he quickly assumed the role of teacher. Max and Rex entertained and aggravated one another 24 hours a day for many years. Then, within 12 months, Max and their frequent playmate, T&T’s Shih Tzu, Zane, died. Rex sunk into the depths of despair. Gradually with lots of love, attention and pampering, Rex accepted his role as topdog, Rex was my constant companion. He was a loyal, loving, confidant and friend. During the pandemic he became extremely attached and his separation anxiety worsened. Rex loved our road trips to see “Grandma” in Cincinnati. She was convinced he needed “real food” and carefully diced whatever meat she was eating to share with him. He believed in routine, never allowing me to sleep past 9am, his time for breakfast and a walk. If I was on the phone and Rex suddenly started making a fuss, my friends would Tess, “It must be 4:oo pm, time for Rex’s dinner.” After taking a long evening nap, Rex would wake up at around 11pm for his final trip outdoors. Rex’s favorite place was Pathways to Independence, a doggy daycare that trains and employs young people with autism. Rex refused to be corralled in the small dog area. After all, he saw himself as the alpha dog. The owner once told me, “Rex must like it here. He runs from one end of the building to the other with a pack of dogs following him. When the other dogs get tired and stop, he turns around, barks and the chase continues.” Rex loved his buddies and the hugs, kisses, and cuddles from the young people who work there. A few weeks ago, Rex suddenly stopped eating. His vet diagnosed him with cancer and gallbladder disease. Dr. Sarah tried everything she could to save him. Seeing Rex sick and lethargic was very difficult. In the end, the medications, injections, IVs, force feedings with an eye dropper, etc. all failed. He shrunk from a high weight of 13 lbs to just 8 lbs in less than 2 months. Rex’s suffering came to an end on July 7, 2021. I cradled him has life left his body, They would have picked him up at the vet, but I didn’t want any mix ups. Rex had come to me as a puppy, and grown up with my grandchildren. It was my time to serve him. So, I brought him wrapped in his favorite blanket to Schoedinger’s. The staff was so warm, kind and considerate. They reassured and comforted me. I am so very grateful. Within 48 hours, Rex was cremated . Hopefully, he is in doggie heaven, reunited with his best buds Max and Zane. Losing Rex was and still is painful. We look forward to the day when our hearts have healed, and we’re comforted with the wonderful memories of times we shared. Rex’s body is gone, but he will be in our hearts and minds for eternity. Blessed to have Rex in our lives, Mom, Tia, and Tamia

Rex Rousey April 2007-July 7 2021 Rex, a Maltese, was just 2 months old when we met. He was an adorable white, fluffy ball of energy, fun and mischief. His older brother Max, a Shih Tzu, was less than thrilled with the puppy. However, he... View Obituary & Service Information

The family of Rex Rousey created this Life Tributes page to make it easy to share your memories.