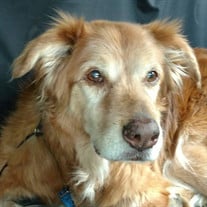 It was Friday, November 6, 2015. I was at my desk at WSYX ABC 6 and I looked up at the noon news just in time to see the face of a senior dog that was being featured on our adopt-a-pet segment with the Franklin County Dog Shelter & Adoption Center. His name was Smokey. They said his previous owners had moved and left him behind. They thought he was 12. There was something about him and his back-story that just grabbed my heart. It had been two years since we lost our “soul dog” Snickers. We’d been talking about opening our home to another dog - maybe a senior dog - to join Karma and all the cats. I called Laura at home and told her to turn on the TV. As soon as she saw him she said, “Should I go get him?” And that’s how Smokey became Smokey Ludlow. He immediately got along with Karma. But it wasn’t until we got him home that we discovered Smokey didn’t like cats. And that was a problem because we had three of them. They seemed to trigger his prey instinct. Dog experts told us we’d never be able to trust him around cats and we were putting the cats at risk. So we developed a plan to keep everybody safe. Smokey could roam the house during the day while the cats were sequestered in the sunroom. The cats could roam at night while Smokey was penned or crated near us. We did this for two years until we noticed that he no longer seemed to care about the cats. When we finally allowed Smokey and the cats to be together, we watched in amazement as they would rub on him, or even sleep with him. They were pals. And we never ever worried about Smokey and the cats again. He was a happy dog. He let us know every day how much he enjoyed living with us. And oh how he loved Laura. She was the one who pulled him from the shelter that November day and the way he looked at her every day after that made it clear just how grateful he was to her for rescuing him. Don’t get me wrong. He could be a booger at times. It took him awhile to warm up to other dogs. He liked to bark every time the neighbors came home. And when we’d pass people or dogs on our walks his hackles would go up and his bark could be frightening. But there was so much about him to love. We always knew that taking in a senior dog meant that we wouldn’t get as many years with him as we’d like. But other than slowing down a bit at age 15, Smokey seemed to be in good health. Until the morning of Sunday January 13, 2019. I noticed Smokey had been restless overnight. He kept waking me up by getting up and down and walking in and out of the bedroom. After getting dressed, I called him to go downstairs with me and he walked out of the bedroom going the wrong way and bumping into things. We quickly realized he seemed confused, couldn’t see out of his right eye, and his right legs were weak. He’d suffered some sort of neurological episode. It was likely a stroke. Smokey was admitted to Avery Animal Hospital where we were told dogs can often recover from strokes. So they said we should hope for the best, but prepare for the worst. In fact, Smokey didn’t get better. His condition deteriorated. Whatever had happened to him was not something from which he would recover. And we were faced with that terrible decision that confronts so many pet owners. Smokey, we loved every minute of having you in our lives. We’ll miss everything about you. We’ll especially miss playing fetch with you while Karma herded you like a sheep. How you howled when the tornado sirens were tested. We’ll miss the way you followed Laura everywhere she went. And how excited you were for rides in the car. How you liked to sleep in a chair with your head dangling over the side. We’ll even miss your horrible dragon breath. You were special. You were a good boy. You gave us nothing but unconditional love. There’s not a pet owner out there who hasn’t been through what we’re going through. Our compassionate vet Dr. Ed Huschart reminded me that “Having a pet will bring you a lifetime of wonderful memories. And one of the worst days of your life.” And so January 15, 2019 will be added to the list of our worst days. It’s amazing how one less heartbeat can change a home. Our hearts are shattered. We can’t stop crying. But even though we had him for just over three years, we would do it all again. Smokey brought us so much joy. He knew how much he was loved right up until his last breath. I reckon one day, after the tears stop, we’ll start looking for the next furry friend to join our home. Until then, we will hold Karma and the cats closer. And remember all those wonderful memories that Smokey left behind… Smokey, we love you.

It was Friday, November 6, 2015. I was at my desk at WSYX ABC 6 and I looked up at the noon news just in time to see the face of a senior dog that was being featured on our adopt-a-pet segment with the Franklin County Dog Shelter & Adoption... View Obituary & Service Information

The family of Smokey Ludlow created this Life Tributes page to make it easy to share your memories.