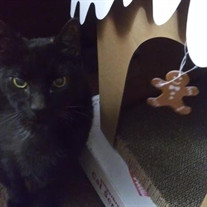 In loving memory of Survivor Fankell. Survivor was born August, 1st 2004, and crossed rainbow bridge on April, 22nd 2021 at 6:17 p.m. and was 16 1/2 years old when she passed after an long, tough battle with cancer. She proceeded in death by her biological mommy, Sweetiepie Fankell, who passed away on July, 19th 2018. Survivor was brought to us on her birthday by her mommy on August 1st, 2004. We had wondered and worried about where her mommy had went because she had been gone for longer than usual. She was named Survivor because of the litter, she was the only surviving kitten on that dark, stormy night when her mother disappeared and went into labor to deliver her. We had fed her mother for an couple of summers and the whole time she was pregnant for Survivor. It was when she was born and her mommy brought her to us after we asked her to we agreed together to rescue and adopt them. Her father was an feral cat who only had one eye and never came around much. Survivor was an distant but loving cat. She loved standing on our legs until paw imprints appeared for attention, especially after we had been away for an while. She was an finicky cat. Among her favorite foods were delectable stew, friskie's turkey and cheese, meow mix crab meat, and creamy whitefish fancy feasts. Her favorite table food was turkey, cheese and roast beef, especially if you told her it was rat meat. Her favorite treats were temptations (especially catnip fever flavor), fancy feast duos and pounce. And whenever she was angry or curious about something (she loved to sneak in rooms and snoop around when she wasn't supposed to!), she'd flip her tail up and down. And in her prime, she was an excellent mouse hunter, and would catch mice when directed to. She also once as an kitten heroically snuck into one of our rooms and alerted us to an clothes iron that was left plugged in we forgot about that had been on for an couple days. Had it not been for her, who knows what would have happened. She was an good cat that while gone, will forever remain in our hearts. May she RIP with her mommy over rainbow bridge until we see them again.

In loving memory of Survivor Fankell. Survivor was born August, 1st 2004, and crossed rainbow bridge on April, 22nd 2021 at 6:17 p.m. and was 16 1/2 years old when she passed after an long, tough battle with cancer. She proceeded in death by... View Obituary & Service Information

The family of Survivor Fankell created this Life Tributes page to make it easy to share your memories.

In loving memory of Survivor Fankell. Survivor was born August,...