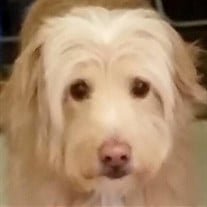 Tanner Clemens 2002 – May 2, 2018 Wednesday evening, May 2, 2018 Tanner aka, "The Best Boy Ever" passed away peacefully at home with the gentle help of his long time vet of 15 years, Donna L Violet DVM and his loving Aunt Nina. He was wrapped in his Grandma Hennen's Angel Quilt. Grandma Hennen loved him dearly and was surely there waiting for him on the other side. No more pain, no more confusion, no more deafness, no more wearing those embarrassing blue diapers, no more nasty pills hidden (he knew) in a spoonful of peanut butter. Now he is free to once again "Run Like the Wind". Tanner was born into our family on December 5, 2003 at the age of one (plus or minus a few months). I really don't recall anyone at the Franklin County Animal Shelter telling us why this sweet boy was there. I do know the minute me and Nina walked up to his cage, he stole my heart and has never let go. But then again, Tanner stole everyone's heart. Everyone loved Tanner and Tanner loved them all right back with all his heart. He always knew the right time to put his head in your lap or his paw on your knee. If you were sick or sad he would stay right next to you to keep you company. When he saw you, he would wag his tail so hard and fast it looked like he would lift right off the ground. Tanner knew when either Dan or I were coming home and close to the house. He would start wagging his tail, barking and prancing before either of us even turned onto our street! He would not stop until we walked in the door and then he would smother us with kisses! It was not uncommon for family, friends and even new folks he had never met to get right down on the floor with him to hug and cuddle him. He had doggie charisma! He had so much charisma, if he decided he should do "his business" in the neighbor’s yard (which he did often because his Dad would let him) they would say, "He's fine, saves us from having to fertilize! “ His adoption papers describe him as a long haired brown Terrier-Mix; which is a less than adequate description for this handsome, lovable, highly intelligent, independent, stubborn (he failed his obedience training class) bearded collie golden retriever mix with the brown soulful eyes (that would melt your heart) and the pink nose (that would make you smile). Tanner loved to run as fast and far as he could go. We are blessed to have a very large back yard and neighbors with no fences. So, if you said, “Tanner, Run like the Wind", there was no stopping him. I think he thought he was a greyhound! He would run so fast his floppy ears and long coat would fly in the wind and he would not stop until he could run no further and turn around and run as fast and happy as he could back home! Tanner ran so fast and so often that in October of 2013 he completely tore a ligament in his right back leg! His surgery went very well and after several weeks of physical therapy (he especially liked the underwater treadmill); three months later he was right back to "Running like the Wind! “ Something must have happened to Tanner before he was taken to the shelter that left him with his one and only fear - Car rides. Tanner was very frightened and anxious during the car trip home from the shelter, I could hardly drive and try to calm him at the same time. Tanner's fear of car rides has never changed. Special thanks to Dr. Donna Violet and Aunt Nina for understanding his fear. Driving from New Albany, Ohio to our home in Groveport, Ohio on Wednesday evening so that Tanner could pass away in the comfort and safety of his own home with no fear. I could go on and on about our Tanner "The Best Boy Ever”. Tanner gave us 16 years of unconditional love. We love him and will miss him more than words. He was also loved and will be missed by his many Aunts, Uncles, Neighbors and Friends. Dan & Pat Clemens and Friends��Z ǂ

The family of Tanner Clemens created this Life Tributes page to make it easy to share your memories.